King Goops are one of the two mobs currently occupying the ,'Swampland', easily capable of killing under-leveled players, who underestimate the actual strength of Goop-Kind. The king goop, much like their smaller cousins, are green, and very-non-threatening with their small-pupils, and crossed eyes. This portrayal of theirs however, has led to many a player having lost their level, and reputation.

When fighting a king goop, it is recommended to do so at a higher level, as while they give an acceptable amount of experience, they only drop small potions. This can lead one to running out of small potions, due to constant use. Although being able to survive only on small potions while fighting in the 'Swampland' is viable, it is not recommended, as a player's ability to regain health will likely fail to compare to the damage being taken from both the king goop and goop occupants. This can be fixed by fighting in a group, but really, If already part of a group and are fighting the king goop and goop variants, just go hunt monsters in the lava territory. Recent discoveries have also shown that these monsters are in fact poisonous. As such, always have some helpful antidote potions.

Why farm these when there are mummies? 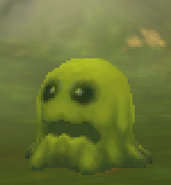 Add a photo to this gallery
Retrieved from "https://relmz.fandom.com/wiki/King_Goop?oldid=1695"
Community content is available under CC-BY-SA unless otherwise noted.